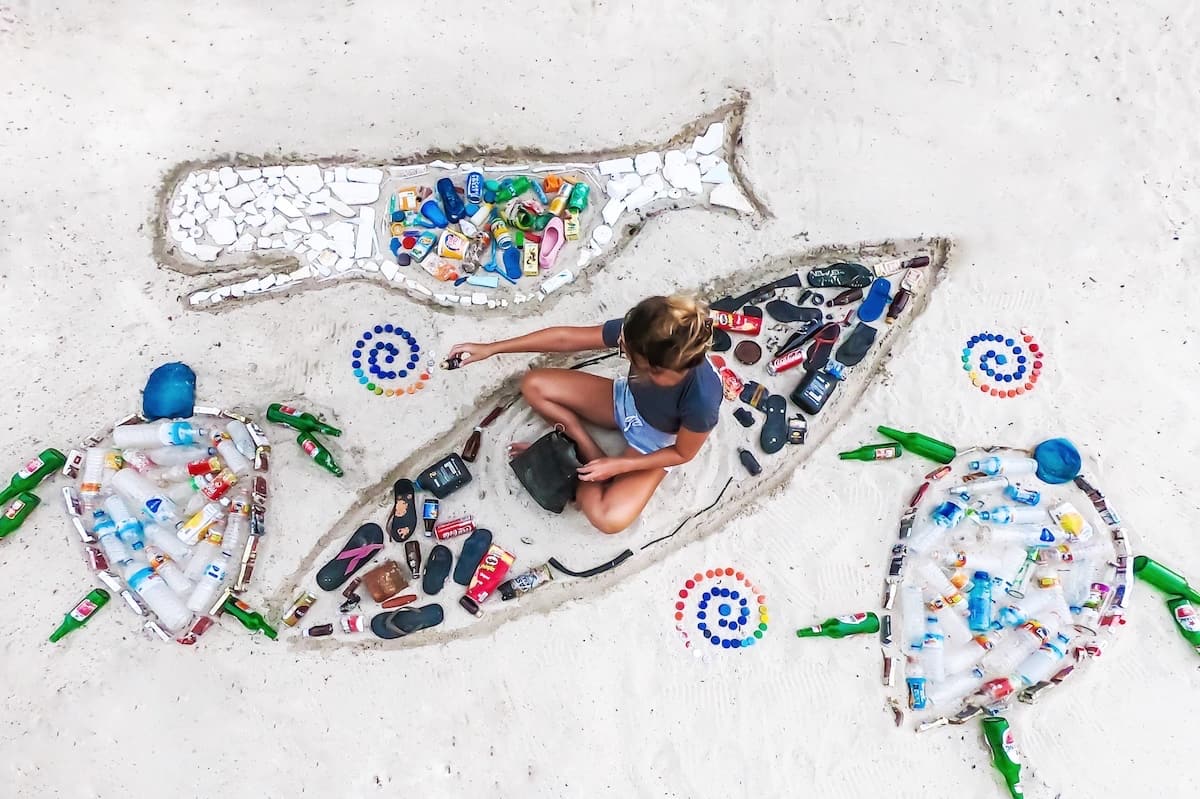 You might not notice it in your every day life, but plastic pollution impacts every single person on the planet. Some feel the effects more than others, however, particularly those in lower-income countries. Earth Day is the perfect opportunity to learn a bit about this global problem, but we believe that #everydaySHOULDBEearthday! Here are some fast facts everybody should know about plastic pollution:

17 Things You Need to Know About Plastic Pollution

1. Only about 9% of plastic ever made has actually been recycled. 91% of plastic has been incinerated or gone into landfills or into our natural environment.
-National Geographic

2. More than 9 million tons of plastic waste end up in the ocean each year.
-National Geographic

3. The equivalent of a truckload of plastic enters the ocean every single minute.
-Greenpeace

5. Almost 50% of all plastic ever created was made after the year 2000.
-National Geographic

6. Plastic recycling rates are highest in Europe at 30%, China recycles 25%, and the United States recycles only 9% of its plastic trash.
-National Geographic

7. Every minute, nearly a million plastic beverage bottles are sold around the world.
-National Geographic

8. 500 million plastic straws are used DAILY in the United States — enough for straws to circle the world two times.
-Greenpeace

9. Almost 2 million single-use plastic bags are used around the globe every minute.
-Greenpeace

10. About 8% of the world’s oil production is used to create plastic. At the rate we’re going, it’s projected that this will rise to 20% by 2050.
-National Geographic

11. Around 9 out of 10 seabirds, 1 out of 3 sea turtles, and more than half of whale and dolphin species have consumed plastic.
-Greenpeace

13. Over 90% of worldwide waste is exported to lower-income countries that often lack sufficient waste management systems and facilities.
-Greenpeace

14. The areas most impacted by plastic pollution are the coastlines and rivers in Indonesia, the Philippines, Thailand, Vietnam, and China.
-Greenpeace

15. At the rate we’re producing plastic and other waste, global waste will grow 70% by 2050.
-Greenpeace

16. Not only does plastic waste contaminate the earth and ocean, but it clogs drains which results in floods, it causes respiratory issues when burned, and shortens animal lifespans when consumed.
-The World Bank

17. The plastic we use degrades into “microplastics”, which are tiny particles that are nearly impossible to recover. These microplastics end up being ingested by animals, which people in turn consume.
-The World Bank

For Earth Day 2019, Mad Monkey pledged to pick up 1409.5 pounds, thanks to our followers on Instagram! We posted a photo saying we would pick up one pound for every 5 Likes and 2 friends tagged, and you all sure delivered! We organized cleanups in the Philippines, Indonesia, Thailand, and Cambodia with our staff, guests, and others in the local community. While we know that cleanups aren’t the solution to plastic pollution, we’d like to think that every bit of rubbish cleaned up results in fewer sea turtles, birds and other animals ingesting plastic bags, straws and other trash.

What we’ve seen from our regular cleanups across Southeast Asia and Australia is that the biggest impact we make is awareness. When people see others cleaning up the beaches and cities they’re living or traveling in, it makes them think twice about littering. Some might decide to join in on the cleanup, and others might reconsider that plastic straw or plastic bag later on.

We’re past the point of just recycling; humans right now must think of the bigger picture. Policy change and and an improvement of waste management systems and facilities worldwide are what we need to focus on. The most important thing every individual person can do, however, is to reduce your plastic consumption and waste.

What can you do to combat plastic pollution?

ELIMINATE THESE THINGS FROM YOUR LIFE:

BE A GREEN TRAVELLER

This is especially important when traveling to developing countries. Prepare before your trip and be conscious of the environmental impact you make as a tourist.

We know for many it’s not ideal to completely eliminate animal products from your diet, but reducing your meat consumption goes a long way! 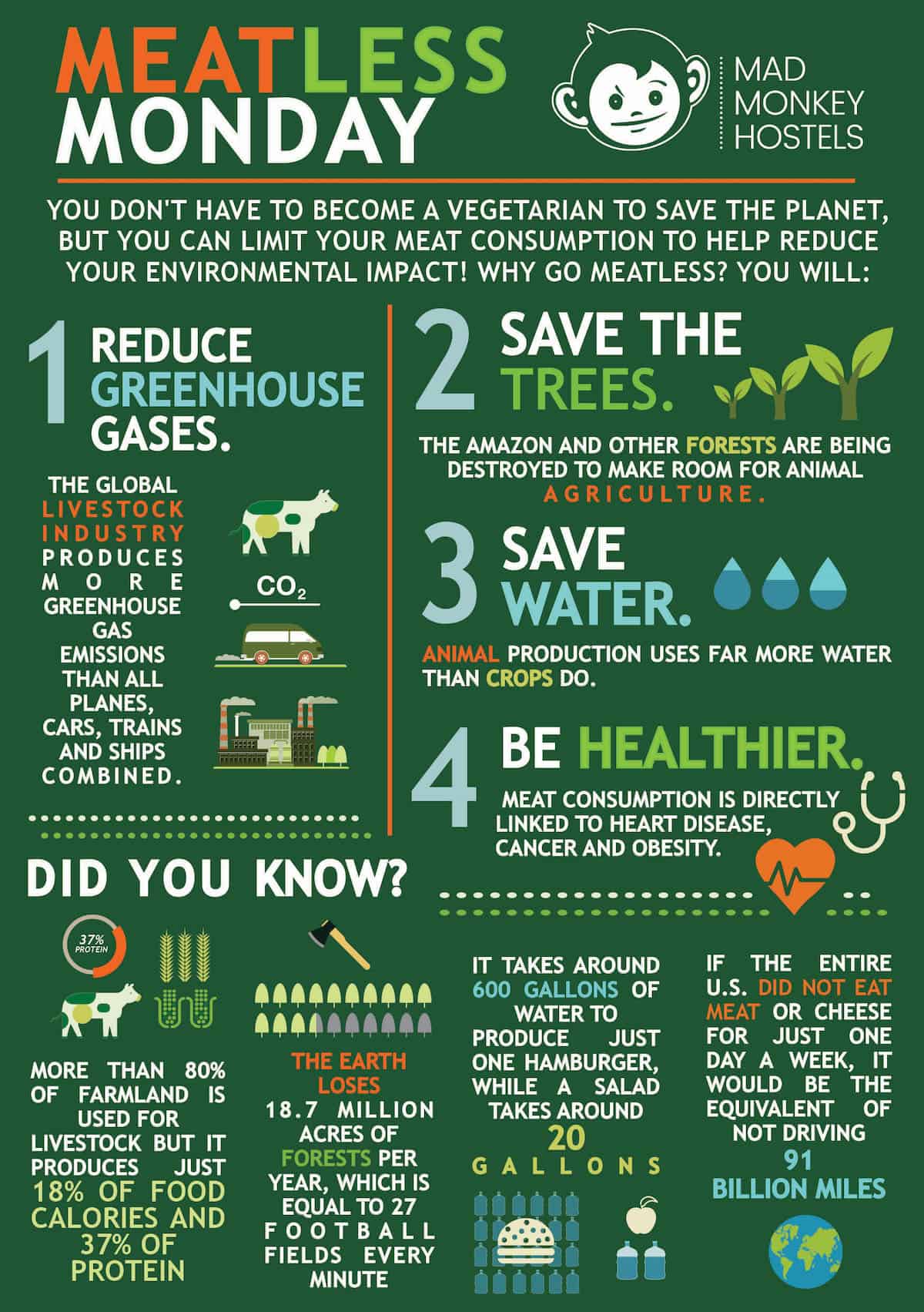 You know those cigarette butts you constantly see on the ground? Those are made of plastic too and often make their way to waterways that lead to the ocean. 65% of cigarette butts are littered, and 5 trillion cigarettes are purchased yearly (that’s about 3,250,000,000,000 cigarettes being littered every year). The type of plastic they’re made of, cellulose acetate, takes about 10-15 years to break down. Cigarettes are highly toxic ; remember that the remaining bits are the part that filter out the worst chemicals, which leech into the ground and bodies of water.

Join a cleanup or even start a cleanup! Join environmental groups in your area and follow them on social media to stay updated on their current events. Be an eco-warrior and teach your friends and family about our global plastic problem!

What is Mad Monkey doing to combat plastic pollution?

Mad Monkey Hostels is a socially responsible hostel, and this extends to the environmental impact we make in the places we’re located. We intend to become more and more environmentally-friendly in everything that we do! Here are some of the ways we have become more sustainable so far:

Most of our hostels are now plastic straw-free! We only offer paper straws on request and encourage our guests to learn “no straw, please!” in the local language to request this in other establishments in the country! 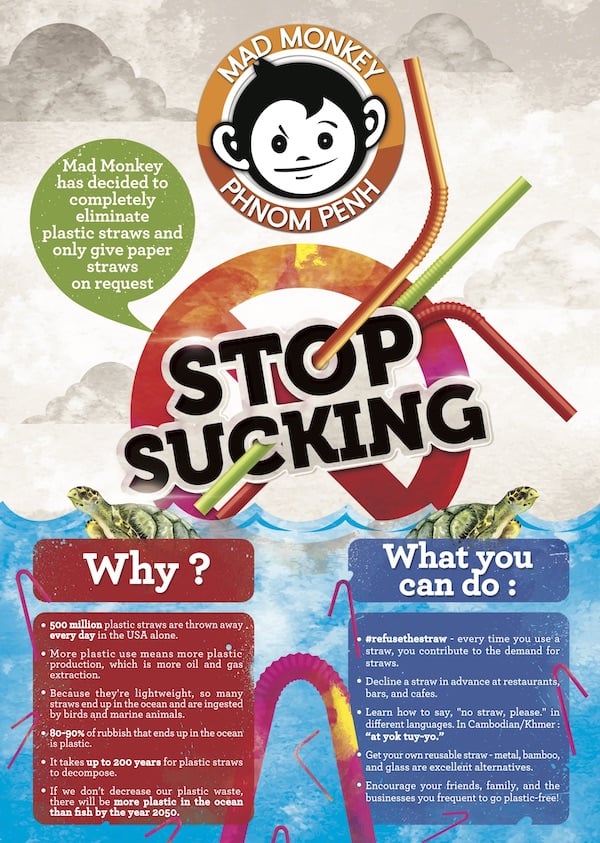 WE HAVE WATER REFILL STATIONS

Most of our hostels have water refill stations so guests can avoid having to purchase plastic water bottles.

WE USE ECO-FRIENDLY SUPPLIES

Many of our locations host beach cleanups on a regular basis. We want the beaches where we’re located to stay clean and sparkling but most importantly, we want to spread awareness about plastic pollution that’s especially prevalent in Southeast Asia.

Book your stay at our hostels HERE! 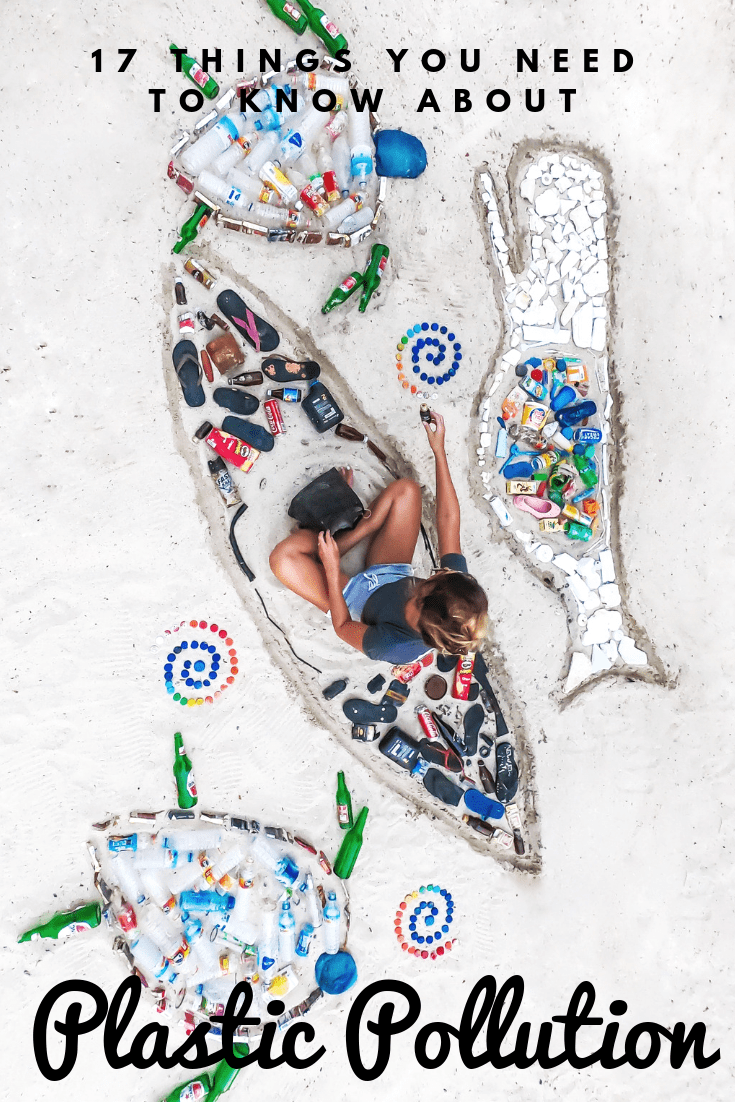 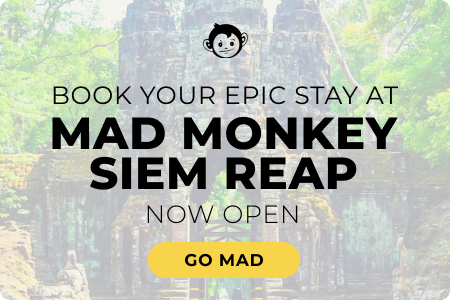