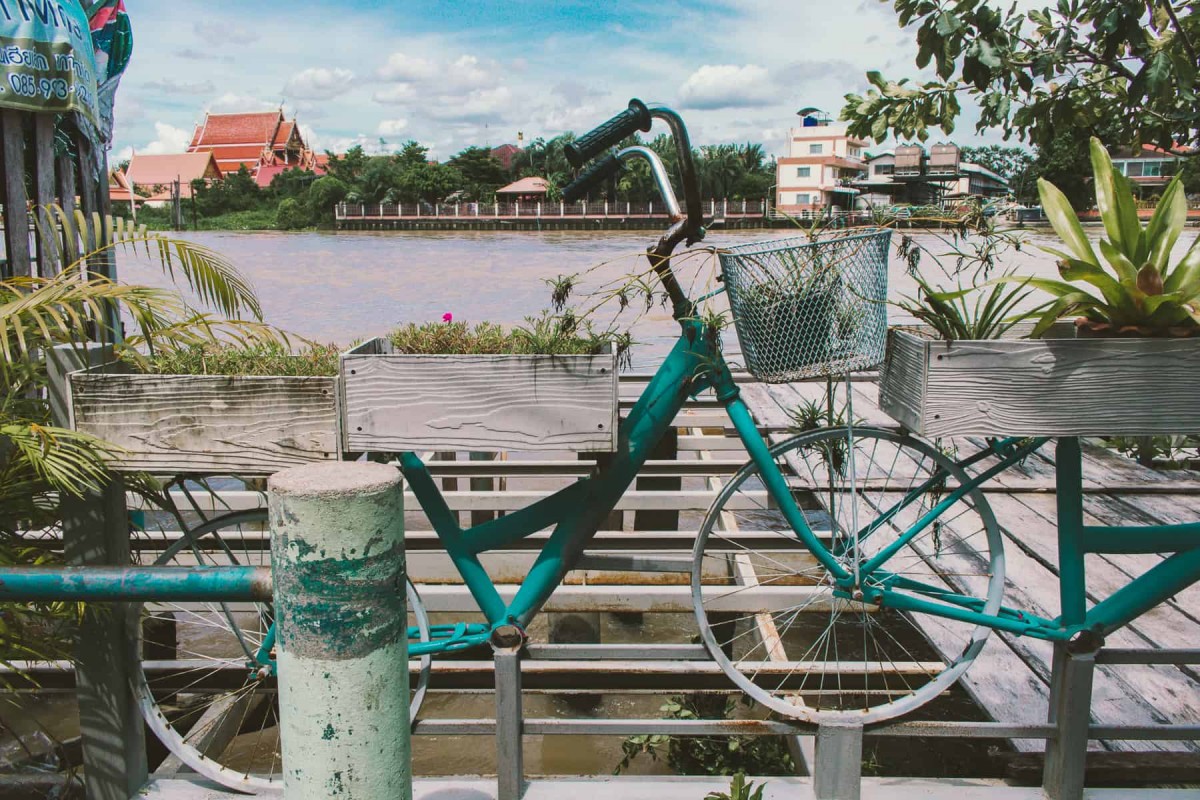 Cycling in Bangkok: the Best Places to Go

Cycling in Bangkok may seem like a dangerous and overwhelming ordeal. Between the heavy traffic and lack of green spaces, bike-lovers may give up on the hope that they may ever be able to cycle in the capital. Luckily for those with a need for two-wheel speed, there are a handful of places where cycling is safe, enjoyable, and affordable. Here, the best places to go cycling in Bangkok.

The artificial island of Bang Krachao is one of the most enjoyable places to cycle in Bangkok. It sits on the outskirts of the capital in a horseshoe bend of the mighty Chao Phraya River and a canal found west of the city. Bicycles can be rented for an entire day here for only ฿50 (approximately $1.50), and there is certainly plenty to see on the island.

Take to the narrow paths and explore the green lung of the capital via bicycle. It has been dubbed this by both locals and tourists alike for two reasons: the first is that it provides Bangkokians with a refreshing escape from the city. The second reason it was dubbed this is that the island actually resembles the shape of a human lung. It is also known to the locals that reside on the island as ‘pig’s stomach island.’

In addition to its unique shape, the island of Bang Krachao is equipped with a handful of temples, restaurants, and cafes worth checking out. There is also a picturesque flower trail and a large park found here. The island is about 19 square kilometres in size and is the perfect place to cycle and explore for an entire day.

Bang Krachao is fairly easy to get to. First, you will want to go to the Bang Wa station on the BTS Skytrain. Then, get a taxi to the pier where the ferry is found. Some local taxi drivers will not understand the word Bang Krachao but most should know Wat Bangna Nok, so tell them that if they do not understand. This is the name of the temple that sits just adjacent to the pier. From there, you will have to pay ฿4 to get to the island.

Found in the heart of the capital is Benjakiti Park. With all of the foliage and greenery, the park is home to, it is hard to believe it is but a stone’s throw away from Soi Cowboy, the capital’s most infamous red light district. With that being said, visitors will find that the green space is certainly an oasis from the urban decor Bangkok is mostly made up of. The park is outfitted with two paths: one for pedestrians and one for cyclists. Cycling here it is a great way to spend an afternoon in the City of Angels.

Much of the path is shaded by trees that line its concrete exterior, making for a cool ride in Bangkok’s often insufferable heat. A large lake sits at the core of the park, and cyclists are able to take in the views as they get some exercise. In addition to the lake, Benjakiti Park is also home to a number of noteworthy finds, including outdoor gym equipment, a skateboard ramp, and more. The park was established in 2004 to honour the birthday of Queen Sirikit. It certainly is in the running for being one of the most picturesque green spaces of them all. Bicycles can be rented for about ฿50 (approximately $1.60) an hour.

Go to the Asok BTS Skytrain station. From there, it is about a ten-minute walk to Benjakiti Park. You can also opt to get a short motorbike taxi or tuk-tuk ride to the park from the station.

Ko Kret is another artificial island found on the outskirts of the city. It is similar to Bang Krachao but unique all the same and is certainly worth a visit for those hoping to cycle in the capital. Bicycles can be rented for ฿50 (approximately $1.60) for an entire day. The main path around the island is some six kilometres in length. Sprinkled around the island are a number of memorable finds, including the slanted chedi, otherwise known as the leaning pagoda.

Phra Chedi Mu Tao, or the Slant Chedi, is over 200 years old. It is nestled along the banks of the murky Chao Phraya River and found on the grounds of a Buddhist temple. Do not be surprised if you see a few monks meandering about. There are also many stunning Buddhist temples found around the island, like Wat Sala Kun and Wat Chim Plee. After meandering the grounds of these religious structures, you can take to your bike and visit the Mon Cultural Center or explore the thriving weekend market here on foot.

Ko Kret is a bit far outside of the city (20kilometerss north of Bangkok in the province of Nonthaburi). It is definitely a trek to get to the island. A visit here is certainly worth the travel time, however. You will first have to go to the Saphan Taksin BTS Skytrain station. Then, take exit two and get the Chao Phraya River Express boat to the Nonthaburi pier (N. 30). The one-way journey is ฿15. From there, you will have to get a boat to the island, which can cost up to ฿400 (approximately $12.80). Though it is a bit expensive, the journey is certainly a noteworthy one.

You do not need to venture to the countryside of Thailand in order to feel like you are already there. Lumpini Park is a rare find in a city that otherwise consists of grey ornamentation. It is here you will find serene greenery surrounding the 2.5-kilometre walkway around the park. The winding trail surrounds the artificial pond that acts as Lumpini’s centrepiece. If you need a break from your bike, take to a duck boat and paddle through the pond or chill out on the banks of the murky water.

Be on the lookout for monitor lizards that call this park home around the lake. Fret not, as they are not dangerous unless you try to take a photograph a bit too close to one of these prehistoric-looking creatures (found that out the hard way).

In addition to stunning scenery, there are also loads of activities that take place here on an everyday basis. Fitness classes are a daily occurrence at Lumpini Park, with loud, local music blaring from large speakers. An instructor guides herds of people through a dance routine of some sort, making for a lively spectacle. Feel free to join in; everyone is welcome! Though we are not sure when the dancing first started, the park came to be in the 1920s. It is one of the oldest and largest parks in the capital, coming in at about 500 square kilometres in size. The park is teeming with animals, trees, plants, and more and provides cyclers with plenty of things to see and do in addition to cycling.

Lumpini Park is located right off the MRT Subway. There are two stations you can get off to reach it: Silom and Lumphini. You can also get there by taking the BTS Skytrain to the Sala Daeng station. It is about a ten-minute walk from there.

Bicycle Tours you Should Know About

If the thought of taking on the city by bicycle alone is a daunting one, be sure to check out these companies that offer tours of the city via bicycle!

More Information about Cycling in Bangkok

Did you love this article about cycling in Bangkok? Do you want to know more? Then check out these articles we rounded up to get you riding around the capital in no time! We only recommend blogs and articles we read ourselves, as well.